“Terminology is an attribute of science, and the scientific sphere,
as is known, has an international character “,
– states linguist I. Kozlovets.

Current issues of modern terminology: problems of normalization and standardization of terminology, analysis of the peculiarities of the use of terms in a scientific field – were considered within the IV International Symposium “Sociocultural Discourse of the Globalized World: Science, Education, Communication” at the V All-Ukrainian Round Table: Problems of Terminology: current state”.

This event was organized on April 23 by the Department of Ukrainian Language and Culture of the National Aviation University. Scientists of higher educational institutions of Ukraine made reports at the round table. Among them are teachers of the Department of Foreign Languages of the National Academy of Statistics, Accounting and Auditing, who represented their researches: Z. Varavkina “Problems of systematization of Ukrainian economic terminology in modern terminology”, I. Stogniy “Peculiarities of translation of borrowed terminological vocabulary into Ukrainian”.

Speakers and participants of the V All-Ukrainian Round Table “Problems of Terminology: Current Status” will continue to actively cooperate in solving important linguistic problems. 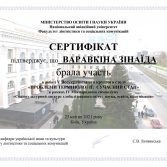 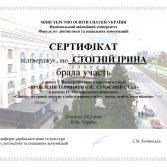