November 8, students of 3rd year of the Faculty of Accounting and Auditing: Tetyana Stasyuk (with a report on “Ivan Franko – folklore”) and Ilona Shtel’makh (report on “O. Potebnya – a researcher of Ukrainian phraseology”) have participated in the national scientific seminar of young scientists, graduate students, students’ “Language and culture as a form of human life and consciousness of the nation”, was held at the Humanities Institute of the National aviation University. 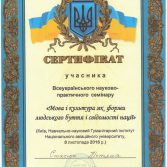 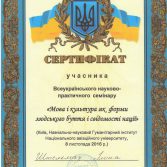 Teachers of the Department of Modern European Languages Z. Varavkina (with a report “Winged expressions in the poetic works of Ivan Franko”), and A. Yakovenko (“The role of language in shaping ethnic identity (by Potebnya)”) were members of the All-Ukrainian scientific conference of young scientists and researchers “Ukrainian language – yesterday, today and tomorrow in Ukraine and the world” that was held at the Institute of Ukrainian Studies of the National pedagogical University of Dragomanov.

November 9 Ukraine traditionally celebrates the Day of Ukrainian literature and language. Members of the student scientific circle “Montenegro” led by Z. Varavkina and O. Yakovenko could not possibly ignore this date and have attracted students of 2nd – 4th years, and teaching staff to write dictation of national unity.

The idea of writing radio dictation occurred 16 years ago after a trip Ukrainian delegation to Poland Radio, which then just took such action. It turns out that these dictations write in many countries.

There is an international writing dictations idea that each country implements its own way and attaches to their own national holidays.

Radio dictation – is an event in which it is worth to at least once to take part! It brings together all participants, regardless of age or social status. It gives a special sense of belonging to a common cause, causes hear beating in unison at every heavy punctuation, all united around language.

We bring up the younger generation

November 10, a senior lecturer in modern European languages O. Yakovenko, was in 3-B class of high school number 101, the Day of literacy was held, an event dedicated to the birth of written language in Ukraine and abroad. She told of Kyiv chronicler Nestor. With interest, students watched the presentation performing logical language tasks. We have met with a great enthusiasm in children watching “museum literacy”: real ink, pen, carbon paper, bark, papyrus, different types of pencils. Active work was awarded by goodies. 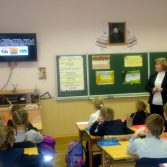 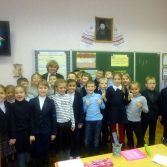 More than the sword, fire, and female’s braid…

Members and students of composition applied to lyric poetry Franko’s collection “Withered Leaves”. Plunged to the exciting world of love and immortal bright of the creative person who is proud of Ukraine and the nation. On this day Franko’s word filled the room with a special aura. It sounded as poetry, melodious ringing in song. Students and teachers (head of department of correspondence and distance learning – L. Deryhlazov, Dean of the Faculty of Accounting and Auditing – O. Pylypenko) with great enthusiasm have read poetry of Ivan Franko.

The success of these events is the evidence that members have the immense love and diligence prepared for it. It is the students of 5th year – I. Vasheka; A. Sinyakov; 4th year – Lisovy; 3rd year – A. Motuzenko, K. Serhutina A. Timonin; 2nd year – O. Kostenko; 1st year – E. Chukhno, K. Laz’ko.

Harmonious complement to this event was the exhibition and exposition “I. Franco – spirit, science, thought, freedom”.

Thank you for a technical and informational support, students: I. Kravchuk, O. Pivn’ova, Yu. Yur.